Airbus Helicopters’ newest lightweight military multi-role helicopter, the EC645 T2 (LUH SOF), has successfully completed its first flight. In the presence of representatives of the German Armed Forces (Bundeswehr), which has ordered the first of this new helicopter type, the EC645 T2 demonstrated its capacities at the company’s Donauwörth location in Bavaria.

“This first flight is a milestone in the EC645 T2 program and we’re thrilled to be able to celebrate this event with our customer,” said Ralf Barnscheidt, Head of the German Military Support Center. “We’re right on schedule to deliver the first EC645 T2 helicopters in the coming year. This is also a product of the close-knit collaboration between the Airbus Helicopters and Bundeswehr project teams.” 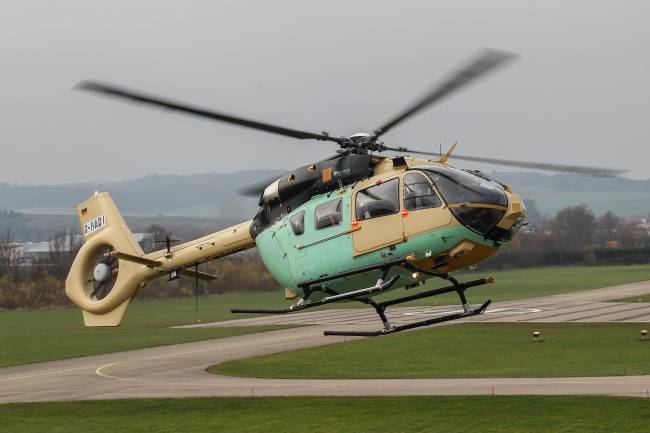 The EC645 T2 is the military version of the civil EC145 T2 that entered into service this past summer. With a maximum takeoff weight of 3.7 tons, the EC645 T2 can be used for a wide range of military operations including transportation, reconnaissance, search and rescue, fire support, and evacuations of wounded personnel. The Bundeswehr has ordered 15 of these helicopters for the German Air Force. The EC645 T2 represents a significant addition to the German Air Force’s capabilities and offers a host of features that make it particularly well suited to missions carried out by the Special Forces Command (KSK).

Building on the robustness, low operating costs and the especially high operational availability of the EC145 family, the new EC645 T2 is equipped with the Helionix® digital avionics suite, including the 4-axis autopilot developed by Airbus Helicopters. This aircraft has been optimized for day and night missions as well as for those carried out in treacherous weather conditions. Its mission equipment range also includes a fast roping system for troops, cargo hooks, hoists, various weapons and electro-optical sensors. Ballistic protective equipment and an electronic countermeasures system that detects threats help protect the helicopter and crew. Powered by two Turbomeca Arriel 2E engines, the EC645 T2 is equipped with full authority digital engine control (FADEC). What’s more, noise emissions significantly below international limits make the EC645 T2 the quietest helicopter in its class.

The military version of the EC145 has proven its worth to customers around the world. For instance, the US Armed Forces operates more than 300 of this helicopter type, which Airbus Helicopters delivered on time and on budget. These aircraft achieve an operational availability of over 90 percent on average. The Royal Thai Armed Forces recently also ordered five EC645 T2 helicopters.

To view images and videos of the first flight, visit events.airbushelicopters.com

Back
You are using an old version of Internet Explorer which is not optimized for this website.